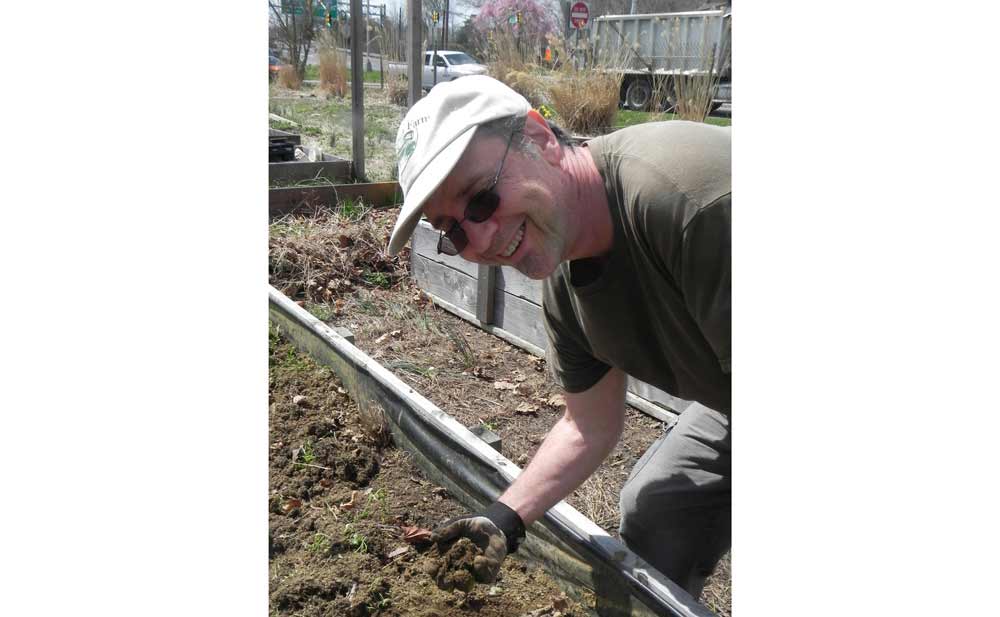 To be sure, longtime NOFA-NJ member Ted Klett believes in giving back to the community.  Since he retired from his post with the State of New Jersey, where he worked on behalf of underprivileged Medicaid beneficiaries, Klett has busied himself,  helping various churches and advocacy organizations set up their own organic vegetable gardens.

“I was a bureaucrat working for Medicaid, crunching numbers as a data analyst, and ultimately the work proved less service oriented than I had hoped,” Klett said of his time with the State of New Jersey.

Klett, a guitarist, singer-songwriter and harmonica player, also pursues gigs with his roots music group, The Bon Ton Calydeco Band, which combines calypso and zydeco melodies and rhythms, and he works as a sound technician in a variety of festival settings and indoor theaters.

He oversees organic gardening efforts for the Princeton Community Church on Route 31 in Pennington.  Several raised beds in the church yard are self-watering and were designed by Boy Scouts.  Not far away are several compost piles of leaves and wood chips in various stages of readiness. He has volunteered his time at several other area churches to help members establish their own charity gardens, thus ensuring they have the resources to donate healthy food.

“We started coming to Princeton Community Church in 2001,” he said of himself and his wife, Roxanne, a vocalist, who joined him in his previous Trenton-Princeton area band, Snapperhead Zydeco.  Roxanne also used to book the bands at the Triumph Brew Pub on Nassau Street in Princeton.

After working in the state’s Medicaid offices for many years, he was anxious to get back to his passion for growing vegetables and being outdoors.  But he also wanted to get back into volunteer work, as he considers himself fortunate to have grown up in Hopewell, where his great grandfather was a cattle farmer just outside of the borough.

In his “hippie years” in college, he took an active interest in environmental science and organic gardening and farming. He became interested in working to alleviate hunger, first at Messiah College in Pennsylvania and later at Trenton State College. He graduated from Trenton State College, now the College of New Jersey, in 1983 with a degree in sociology.

“I took a semester in Pasadena, California where I took a course in Integrated Community Development, taught by Robert Pickett, a tropical agriculture specialist for World Vision International.  He was a big advocate for using appropriate technology, sustainable farming and increasing yields without compromising nutritional value.”

“A few years out of college I became Community Food and Nutrition Project Coordinator for New Jersey’s Community Action Agencies,” he said, noting his job was “to promote federal food assistance programs as well as innovate community responses to food insecurity and nutrition challenges that face many of our fellow New Jerseyans.”

Isles, [a non-profit community development agency,] was starting community gardens around Trenton at the time and NOFA New Jersey was taking shape as a growing organization, he recalled.  He first heard about donation gardening at a conference he attended for that job, and since he’s been at Princeton Community Church, he and a team of other volunteer growers launched Grow for Giving.  The idea behind Grow For Giving is that all organizations — churches, Elks clubs, Moose lodges, corporations big and small with their own land — can plant vegetables and fruits and donate some or all of their harvest.

Why does Klett spend so much of “retirement time” growing food for his fellow church people and less privileged people in nearby Trenton?  He does have an extensive backyard garden of his own, after all, just like NOFA-NJ VP Al Johnson in Titusville.

“I always liked being in the outdoors and seeing things grow. If I get to do that with other people, it’s pretty fulfilling,” he said.

“Gardening together with other people is satisfying, and knowing that there are seniors and disabled people around here who may not have access to local, fresh organic food, I feel I’ve been fortunate enough. I see the need.”

For smaller farmers or backyard organic growers who want to help out, he pointed out, Grow For Giving has its own FaceBook page.