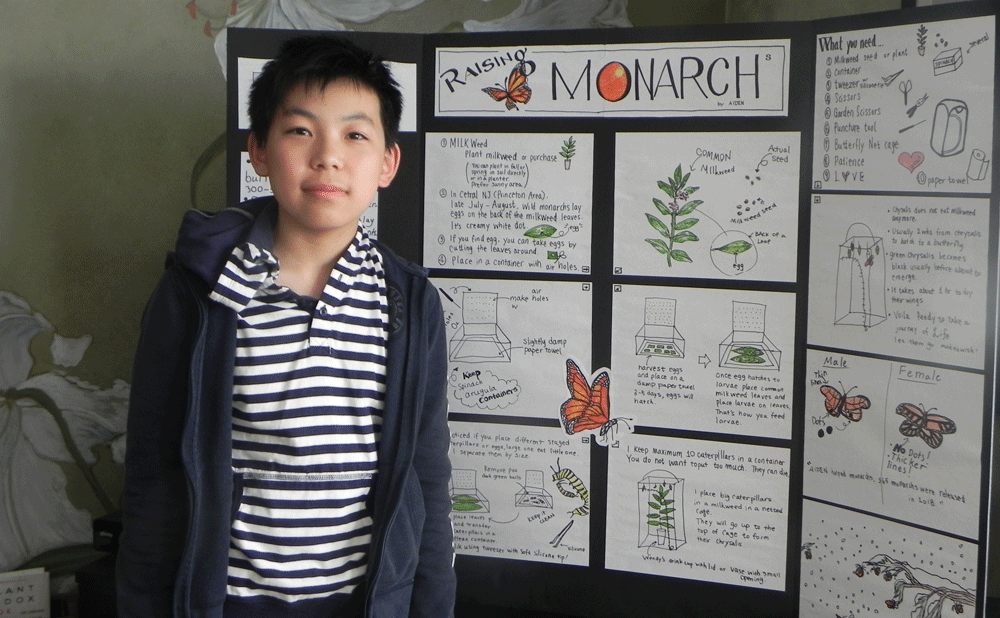 Using Native Pollinators to Boost Yields in Your Yard, Garden or Farm While Aiding Our Fragile Ecosystem Here in the Garden State

WEST WINDSOR, NJ — All of us who are dedicated to organic growing practices and sustainable and regenerative agriculture could take a lesson from young Aiden Wang.  The 12-year-old, a 7th grader at Grover Middle School in West Windsor, has been doing his part to restore the endangered population of monarch butterflies from the side of his house and at the West Windsor Community Garden.  Along the way, he’s inspired others to plant milkweed, ensuring even more monarch butterflies will be out there, pollinating for all of us.

“I first learned about butterflies in first grade. My teacher started raising monarch butterflies in the classroom, then I found out they were endangered, so I got some common milkweed seeds and starting planting them,” Wang said. He began growing them on the side of his family’s townhouse in West Windsor.  His proud parents are Max Wang, a software developer for Siemens, and Yuki Azumi, graphic artist, painter, muralist and stay-at-home mom.

For those who complain about the seeming short attention span of kids today, young Aiden Wang did not have one monarch butterfly land on his milkweed until he was into his third year of trying to grow the plants.

“By searching it up on the Internet, I found out that milkweed is an attractor for them,” Wang explained in the family’s living room.  He thought adding a few dozen, or a few hundred monarch butterflies to the population in central New Jersey could do the world some good.  He’s kept a fairly detailed red notebook since Day One to keep track of his progress.  This year, he exceeded 450 monarch butterflies, all of which have since flown south in November to Mexico, as they do every year.

“By the third year, I found monarch eggs, and I was so excited,” he recalled, “but unfortunately they weren’t monarch butterfly eggs, they were this moth that eats milkweed and so when they started eating my milkweed, I got rid of those caterpillars and maybe a month later the first monarch egg appeared.  I was excited and very happy.” That first year, he had about 25 monarch butterflies that survived and flew off.

What’s the most fascinating thing about monarch butterflies?

“The most fascinating thing is called super generation, and that’s in October and November. They’ll be flying all the way to Mexico from New Jersey or even from Canada. They first go to Cape May and settle there for about a day. They drink milkweed or any flower nectar for a day, and then they’ll take off and other monarchs will join them in their flight,” he said.  It is possible to see thousands of monarchs in Cape May, but one has to be there on the right fall day, Wang said.  So far, he hasn’t witnessed that.

“They go to these certain kind of trees in Mexico every year to avoid the snow,” he explained in the family’s living room.  Wang has raised increasing amounts of monarchs with each passing season. The first year it was 25. Last year, four years into his project, he released 365 monarchs.  Earlier this fall, he released more than 400 into the breeze in central New Jersey.

When do monarchs start migrating? “Normally, late September to mid-October, but it depends on how much milkweed they can find. If there’s enough milk weed they might just stay around here until early November,” Wang said.  As the days get shorter, it triggers something in them and they begin their mass migration to Mexico — with a stop for a day in Cape May — along the way.

Wang said the trees in Mexico that monarchs take shelter in for the winter are slowly disappearing, and this is why the monarchs are now considered an endangered species.  This concerns him a great deal, much as it does native plants and pollinator expert Judith K. Robinson, an organic farmer and consultant based in Hopewell. Robinson goes to people’s farms, yards and even some corporate campuses to help set up gardens of plants that will attract all kinds native pollinators.  Contrary to popular opinion, honey bees are not native pollinators in the U.S., they were brought here from Europe in the 1600’s, Robinson says.

“Organic farmers and even more so, conventional farmers, are not paying attention to the crisis of the loss of native pollinators right where they are, where ever they’re farming,” Robinson argued. She is familiar with Wang’s efforts and his very supportive parents and the movement he’s inspired around West Windsor, where other people are adding to the monarch population by adding milkweed around their gardens and yards.

A typical hive usually has about 250,000 honey bees, she noted.  By contrast, a farmer could use blue orchard bees, native pollinators, and just 750 of these bees can do the same work that tens of thousands of honey bees would do.

“The poor honey bees are being trucked around the country and put under a lot of stress,” before they are released into farmers’ fields, she argued.  Robinson noted there are 4,000 species of native bees in the U.S., yet honey bees are not among them. On the other hand, if you have bumble bees pollinating your tomatoes, they will be bigger, better tasting and more abundant, she said.

Six years ago, environmental groups petitioned the U.S. Fish and Wildlife Service to protect monarch butterflies, the only species that migrate such huge distances, as endangered.  Robinson argued our once abundant numbers of pollinators is dying off, due to over development and misuses of pesticides.  It is this quickly diminishing community of native pollinators –bees, birds, butterflies, beetles, flies, and small mammals — that work together to supply 85 percent of the main global crops that feed people, a huge range of fruits, vegetables, seeds, nuts, and oils.

Wang’s monarch butterfly re-population project has not only inspired other vegetable growers, environmentalists and farmers around Princeton, it also inspired a short documentary film, “Aiden’s Butterflies,” by film maker Olga Talyn of Plainsboro.  The film has been screened at several independent film festivals in New York and at the Princeton Environmental Film Festival.

“Most people don’t know much about butterflies,” Wang explained on the side of his family’s townhouse, and a visit to the nearby West Windsor Community Garden reveals even more of Wang’s efforts. Wang’s garden of milkweed and other monarch butterfly attractors is located just outside the white fence that surrounds the community garden.

“I’m growing milkweed where it’s close enough to attract the monarchs,” he said while pointing to a garden just outside the community garden’s fence. He grows a breed of black flower or silk milkweed on the side of his family home and at the community garden a few miles away.  To educate others in his school system and for the Montclair Green Festival about his efforts, Wang created a three-walled poster exhibit that reveals all the facts about the decline of monarch butterflies, as well as what people can do about it.

Anyone can plant milkweed and get it growing to attract monarchs and other native pollinators.  Robinson and others around Hopewell have done so to help boost the populations of native pollinators, as well as help to boost up the yields in their own vegetable gardens and farms.

“If you plant them, they will come,” Robinson said of her own studies and plantings of certain plants to attract native pollinators to the farm she leases in Hopewell.

Robinson’s background includes many years as an actress and playwright in New York City.  She moved out to Princeton in the 1970’s and began raising most of her food organically for her children.

“I began to learn about pesticides and herbicides and the environmental impact with the way food is produced,” she said, noting she taught organic farming practices for a number of years, “and then I stepped back to an even more basic level because we’ve all learned the decimation of pollinators worldwide is nearly 40 percent.”

Farmers can help restore and repopulate native pollinators here in the Garden State, Robinson said, “but it’s not just farmers who need to be doing this. I teach a lot of people who have suburban yards to create beautiful gardens with native flowers. The more oases you create, the more places there are for them to come to and thrive,” she said, noting so many yards are so barren and contain invasive plants like boxwood that offer neither food or habitat for pollinators.

Robinson has an extensive website www.ourworldourchoices.com, that details simple things homeowners can do to replenish and help boost up the numbers of native pollinators. She also teaches Native Plant Garden Design at Mercer County Community College, the Princeton Adult School, and other venues.  She is available as an on-site consultant and visits homeowners, gardeners and farmers around central New Jersey.

“I do individual designs and create a design of plant species that works for their property,” she explained.  Robinson has spent years studying plants and herbs that attract native pollinators and cited Douglas Tallamy’s books as being helpful for anyone who wants to learn more, as well as her own website.

“What’s interesting is how crucial these pollinators are to everything that comes in above them. They are the foundation of the whole eco-system,” she said, “some of them are generalists and pollinate a lot of things, but others are very specific and pollinate only certain things and stick to maybe one or two species of flowers or blooms.”

If you want to take action to help boost up the world’s populations of pollinators, what can you do?

“When you design a garden or yard space or farm space for native pollinators, you want to design it with three seasons in mind,” Robinson said.

“You really need to consider the whole season of feeding them: spring, summer and fall, so you are providing a three season arc of food and habitat.”