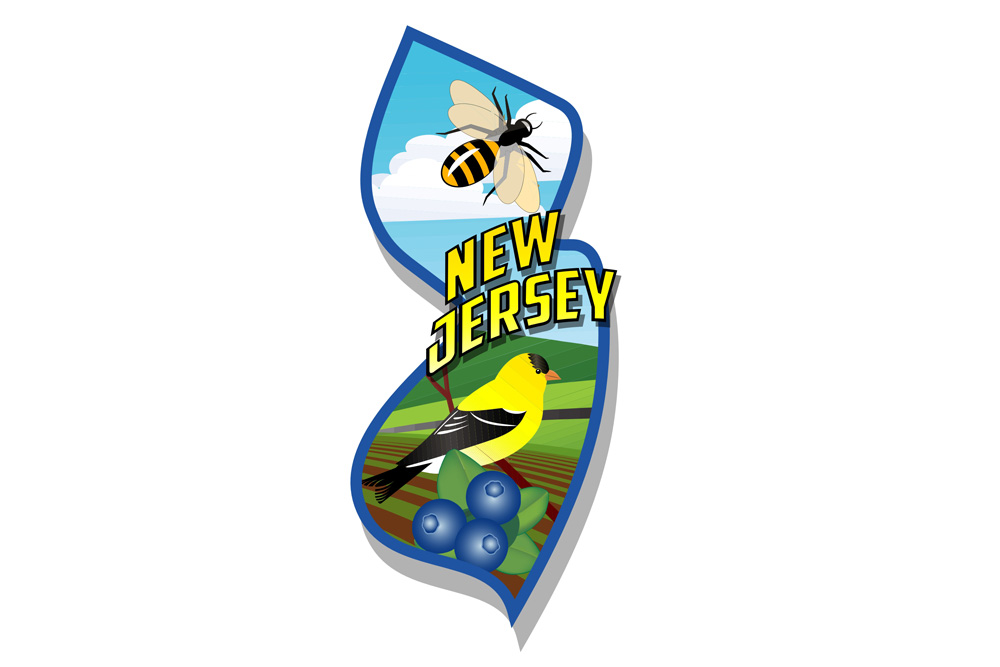 Why is New Jersey called the Garden State? According to a few sources, including the NJ state government itself, most people attribute the origin of the nickname to Abraham Browning of Camden, who used the phrase in a speech at the Philadelphia Centennial exhibition in 1876. Other people suspect that Ben Franklin may have come up with it much earlier.  Whatever the source, the name stuck, and it has been on our license plates since 1954.

When most people think about farming, they think of things like the amber waves of grain, like wheat. According to USDA statistics for 2016, Kansas harvested 8.2 million acres of wheat, compared to 21 thousand in New Jersey. When people think of dairy, they might think of Wisconsin Cheeseheads, and they would be right. In 2015, Wisconsin produced 29 billion pounds of milk, versus only 127 million pounds in NJ.  According to the USDA’s Agricultural Statistics 2017, New Jersey had only 5,600 out of the nation’s million-plus farms. So, it makes sense that we are not the Farm State.

When people think about gardens, though, they think about different things. They think about veggies, berries, flowers and herbs. Here is where New Jersey farms shine. According to New Jersey’s 2020 State Agricultural Review, there were only 9,900 farms in NJ (NJDA uses a different method than the USDA), but they were in the top five states nationwide for such crops as blueberries, cranberries, peaches and bell peppers. By numbers, the majority of New Jersey farms are very small, with annual sales under $20,000.  The top crops in NJ by sales are tomatoes, bell peppers, sweet corn, cucumbers and squash.  Yes, we are the Garden State!

In the USDA’s Certified Organic Survey – 2019 Summary, New Jersey had only 68 of the nation’s 16,585 certified organic farms. We do know that NOFA-NJ has ~870 member organic farms. The top reason why there are few certified organic farms in New Jersey is because very small operators with direct-to-consumer distribution often do not have enough of an incentive to spend the time and money to become certified. When customers know their farmers personally and often pick up their produce straight from the farm, they can see for themselves a lot of what’s going on, and they can ask the farmers about their practices. Another reason why some farms may not become USDA certified is that they identify with another system of growing, like biodynamic, permaculture or restoration agriculture.  While there are many similarities between these, they are not entirely the same.

A good way to find sustainable farms of all types in New Jersey near you is the Farm and Food Guide. While there is no substitute for knowing your farmer, a major benefit of patronizing New Jersey farms that are certified organic is that they are inspected by highly-trained professionals who can show up anytime and take soil and plant samples to test them for pesticides, among other things.  If you want to be sure that a farm is currently certified organic, the best place to check is the USDA’s Organic Integrity Database.  Once you arrive at the database home page, you’ll want to narrow your search by putting “NJ” under state.  If you export the results from this search, you can then narrow the list down quite a bit by including only those operations in the “Crops Scope”.  That will screen out handlers and other operations that are not actually growing the crops. At the time of this writing, there were 98 certified organic farms in New Jersey under the Crops scope – a nice increase from just a few years ago!

We hope that folks will choose to purchase their produce locally, from farms that refrain from the use of synthetic pesticides and fertilizers, and from farmers they know.  If there is a farmer you love who is doing a great job, please be sure to let them, and us, know! If they are not certified organic and you wish they were, again please let them, and us, know.  Demand for organic foods in New Jersey is a multiple of what we are producing in-state. We need more organic farms in NJ!