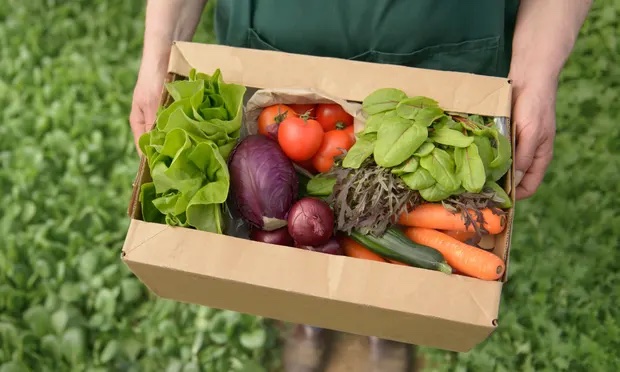 Organic food consumption has soared in the past year across the UK, as people have eaten in more and sought higher quality food, driving the biggest year-on-year increase in sales in 15 years.

The organic market, including food, clothing, cosmetics and other products, increased to £2.79bn, a rise of 12.6% on 2019, according to the Soil Association in its annual organic market report, released on Wednesday.

Home deliveries, including veg boxes, were particularly sought-after as successive lockdowns bit across the country, surging by more than a third to a value of nearly £500m.

As people have made more of their meals at home, many of those fortunate enough to maintain their income have also had spare cash and time to consider their food habits. Many people have reported a rise in their consciousness of environmental issues, as the lockdowns and pandemic forced a reappraisal of health and wellbeing, and of human influence on the planet.

Organic food also soared in popularity in the early 2000s, but sales crashed following the financial crisis and recession of 2008, plunging by more than a fifth from 2008 to 2011. Sales only recovered to top their 2008 level in 2017.

Clare McDermott, business development director at the Soil Association, believes this time it will be different, as it was not just staying in more that had driven last year’s rise. “People are shopping locally, walking to the shops, becoming more aware of the food they are eating and where it has come from,” she said.

She was confident that the change in habits would persist after the pandemic finally eases. “People do not want things to go back to the way they were, and they are more aware of their impacts on the world around them and the environment,” she said. “Nature has become more important to people.”

Brexit has also proved an opportunity as well as a headache for organic farmers. While exporting to Europe is now more difficult, there is more emphasis on local products, according to McDermott. “People have started to be more interested in British food, and there is potential for more British organic produce,” she said.

However, she warned that the government’s shake-up of British farming, begun under the agriculture bill, would be crucial. Organic farmers were eligible for special payments under the old system, for their stewardship of the land and efforts to foster wildlife and habitats. Under the replacement system, current subsidies will be phased out by 2027 and a new system of payments brought in that will reward farmers for providing public goods, such as clean air and water.

McDermott said organic farmers were worried that the improvements they had made over years, for instance in nurturing soil health, would be disregarded under the new system. “We need organic farmers to be fairly rewarded for the benefits they bring,” she said.

Food made up the biggest part of the market, with sales of fresh vegetables rising by more than 15% and meat and fish by nearly 17%. Consumption of organic canned and packaged items leapt by nearly a fifth, as people sought store cupboard food amid fear of shortages, while revamped drinking habits drove up sales of organic beer, wines and spirits by nearly a third.